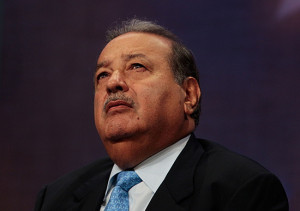 Slim’s only wife, Soumaya Domit de Slim, died in 1999. He funded and named a museum in Mexico City, Museo Soumaya, after her. The Mexican businessman, who has amassed a fortune controlling Mexico’s telecommunications industry, surpassed Microsoft (MSFT) founder Bill Gates in the summer of 2007 as the world’s wealthiest person, according to several media outlets that calculated the value of his stock holdings.